I would love to say that I grew up cooking at someone’s knee. That I spent endless hours of my childhood in a steamy, bubbly kitchen dusted with powdery-flecked-shafts-of-light and me perched on a stool watching my grandmother’s every move, waiting for those moments when an oversized spoon was touched to my lips for me to learn taste. I could entertain you with tales of unrecordable family recipes and booming, day-long family feasts. Here, have a seat in my kitchen and have a cup of tea while I bake a pie, and I’ll tell you all about it.

Well, no. Not quite. I do love to cook, but that story is not my story, although we do have unrecordable recipes and booming, day-long family feasts. 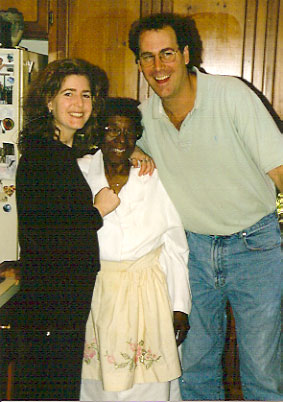 Me, Mattie and my cousin Brian – Thanksgiving 1997

Mattie taught me that kind of cooking — the kind that doesn’t have a recipe. Although she didn’t actually even teach me. Mostly, she cooked while I watched and asked questions like, “How much flour did you just add to those pan drippings to make gravy?”

And her answers sounded like this: “What do you mean how much flour? You look at how much drippings you have and you add enough flour. If it tastes right, you added enough.”

She wasn’t being mean, or rigid, just sensible. As if to say “Don’t worry about measurements — just cook.” Like I needed to concentrate and just do it right.

So I watched, and ate, and watched, and ate. The best fried chicken I have ever to this day put in my mouth. The flakiest fluffiest biscuits. Sweet potatoes that tasted more like pudding. The most comforting chicken pot pies. And sometime after college I started trying some of her recipes on my own. This usually involved a long phone conversation with Mattie where I took extensive notes that didn’t make sense as I wrote them. They involved instructions like, “Then you add your bake powder. Taste it. If it don’t taste right, add some more.” Some recipes required 2 phone calls.

But I bumbled through, and kept trying to serve people dishes that I called “Mattie’s (insert food here).” And after years of earnest practice, I can actually make consistently good buttermilk biscuits having never had a recipe in front of me. I can make fried chicken that mostly comes out right, but sometimes doesn’t. And much of the time, I have good gravy to add to the meal, but sometimes not.

And that’s always the key — getting it to taste right, or getting it to taste just like Mattie’s. No other taste will suffice. I make fried chicken that Bob thinks is great (because really, fried chicken is sort of inherently great), but I’m unhappy if it doesn’t taste just like Mattie’s. That mysterious blend of inexact amounts of salt and spices and secret ingredients.

The first year Mattie didn’t cook Thanksgiving, it took 7 of us to replicate her meal. Seven people. To put together a dinner usually made by one person. And she was coaching us every step of the way. But we were all very proud of ourselves because it tasted pretty much just like Mattie’s. Which is in itself something to be thankful for.

Today will be our first Thanksgiving without Mattie. I spent the day yesterday making “Mattie’s Cornbread Dressing” and “Mattie’s Turkey Gravy” (my assigned tasks for the group’s “Mattie’s Thanksgiving Dinner”) and I probably called my mom 6 times to ask for clarification of one thing, or to discuss options for interpreting another. After all was said and done and it turned out mostly Mattie-esque (the gravy tastes a little of too much flour, but once it’s on food, it’ll be fine — good enough), I had time to reflect a little bit. Thanksgiving for my family, and hopefully for yours, is a happy time. A time of thanks, of course. So I know I should be winding this down by talking about how grateful I am for Mattie. How lucky I was to have so many years with her humming her way around my grandmother’s and my aunt’s and my mom’s kitchens. How very fortunate I am that I can make her biscuits.

I hope your Thanksgiving is as full as I know mine is going to be. That you get to spend time being happy, reflective, grateful, and loved. Full of emotion. Full of thanks. 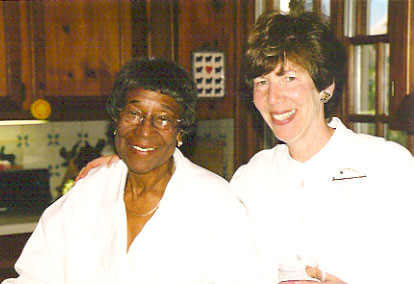